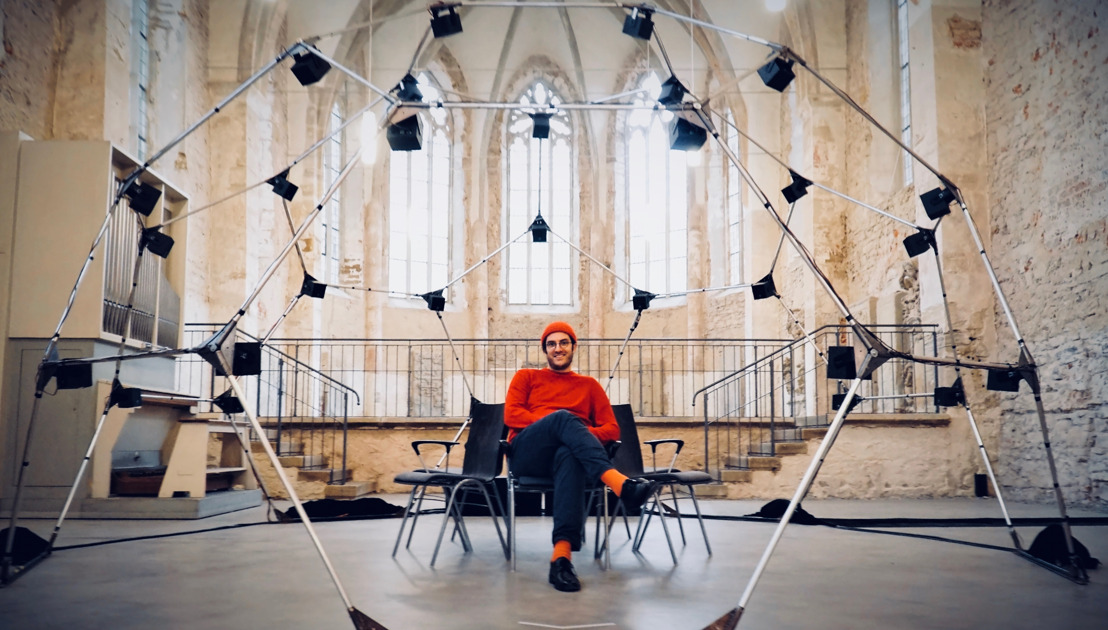 Leipzig, Germany, December 2, 2021 — German composer Heinrich Schütz, active 100 years before Johann Sebastian Bach, was a pioneer of immersive music, writing sacred songs that were performed by multiple choirs, brass and organ arrayed around and even above listeners. As the 350th anniversary of Schutz’s 1672 death approaches, Orchestronik is premiering a series of modern immersive reworkings of the Baroque composer’s pieces that combine orchestra, choir and electronics using L-ISA Studio as its primary creative tool, while monitoring through an L-Acoustics immersive speaker configuration.The project was jointly developed and produced with the Heinrich Schütz Musikfest and its artistic director Christina Siegfried.The dome was lent by Felix Deufel, Not a Number in Leipzig.

Fabian Russ, a German composer residing in Leipzig, also musician and founder of Orchestronik, opened the Heinrich Schütz Musikfest with the first part of his "Kaleidoscope of Spaces" series in 2019, exactly 400 years after Schütz published his collection of 26 polychoral pieces. “It’s a cycle of four parts; the fourth part will be premiered next year in Leipzig, Germany. For every piece we get the recordings from from the German label Carus, recording Schütz's complete works with the Dresdner Kammerchor under Hans Christoph Rademann [Dresden Chamber Choir], one of the best choirs in Europe,” which has released Schütz’s complete works over recent years, says Russ, who is based in Leipzig. “When we do a new rework, we get the multitrack material and I start to work.”

While some of his initial Orchestronik installations involved a horizontaleight-speaker setup, Russ has been able to scale his spatial audio presentations upto a 32 loudspeaker dome setup using L-Acoustic louspeakers in collaboration with local L-Acoustics Certified Partner Distributor, Groh Distribution. The company, located in Hamburg, Germany, acquired 32 L-Acoustic X4i compact coaxial speakers, two subwoofers and an L-ISA Processor that enable Russ to create a larger dome for playback of his immersive Schütz reworks.

Russ has been using Ableton Live as his DAW for over 10 years. “Within Ableton there’s a tool called the Simpler, a simplified sampler. That’s my main tool. I take the recordings, put them into the Simpler and scan for interesting sounds. I add sounds and maybe an orchestra or choir.” To then create his spatial audio mixes, “I needed a system that works well and integrates into the workflow of Ableton. From the very beginning, L-ISA Studio worked super-well,” he says, especially the exchange of automation data between Ableton and L-Acoustics, something he had previously been unable to achieve satisfactorily with other processors.

Using the L-ISA Studio software suite, Russ creates an initial immersive mix on his laptop, monitoring through his stereo speakers or in binaural through headphones with headtracking. When finished, Russ then transfers his mix to his longtime working partner and colleague, the Berlin-based sound engineer, Carlo Grippa, who understands L-ISA technology well, whose acquisition he initiated with Fabian Russ at Radialsystem V Berlin. He project-managed the installation of the first permanent L-ISA Immersive Hyperreal Sound System in Germany at Radialsystem, an arts and performance center in Berlin-Friedrichshain. “The house supports us in the implementation of the installations with their L-ISA,” Russ says. The L-Acoustics speaker system in the venue’s main hall includes five L-Acoustics A15 arrays with KS21 subwoofers.

Having been challenged by the limitations of the immersive processors that he previously used for his sound installations, “I think the most impressive thing we are still experiencing with L-ISA is the space,” Russ says. “In most every 3D audio tool or processor we tried, the reverbs were never really satisfactory. But L-ISA is another dimension. It creates a world that doesn’t really existbut we make it exist. You can create spaces which seem to be realistic, but they aren’t, and you can combine them. That’s what makes L-ISA technology so interesting. And the quality of the engine is really fantastic.”

He elaborates, “You can put things so far away and create such impressive spaces that I’ve never heard before — if you have the right signals and one of the best engineers and a good composition. I’m a lucky guy, having a brillant engineer at my sideand at the same time a great person with whom I've worked together for a long time. You need a lot of experience to choose the right sounds to bring the system to its maximum potential.”

Russ continues, “Often we add another reverb coming through the channel in Ableton to create spaces. You can place a room inside a room inside a room; if it’s well done then you can create the illusion of rooms around you that don’t really exist. You can move them around, and when you move the signals in the L-ISA Controller, they move very precisely, especially in the height range.”

Russ and Grippa first encountered L-ISA technology at Prolight + Sound in Frankfurt in 2018 and subsequently visited L-ISA Labs in London. They continue to work closely with Sherif El Barbari, Director of L-ISA Labs.

“We saw the user interface, heard L-ISA on site and we were quickly convinced,” Russ recalls. “It’s really well done; it’s clear and elegant and not full of colors and knobs that no one really needs. As a musician, it’s sometimes more interesting to have fewer options to work with than an explosion of possibilities or tons of plug-ins. It’s better to have a good, stable, working system with a good room engine and be able to place the signals and combine them in interesting ways. L-ISA Studio has all the tools that I need, without useless bells and whistles, and I'm producing higher quality material because of it.Thus space becomes a serious parameter in my compositions.”

Russ believes that he and Grippa are still at the very beginning of experiencing L-ISA Studio’s potential for their Orchestronik productions. “I think we only have a small idea of what is possible with all the parameters you have for every signal, like width, panning and the possibility of combining two sources to one stereo source and using the pan spread. I’m planning to start from scratch for my next work in L-ISA, and looking forward to seeing what I achieve,” he says.

Schütz, who is often referred to as "the father of German choirmusic," studied polychoral music — music using two or more choirs, spaced apart to create an immersive sound — under composer Giovanni Gabrielli in Venice, Italy at the beginning of the 17th century. Russ has drawn from Schütz’s works based on such religious texts as the Psalms of David as well as the composer’s “Musikalische Exequien” to create his own "Kaleidoscope of Spaces" [Kaleidoskop der Räume] cycle. In 2022, all four parts will be presented in the Frauenkirch, a Lutheran church in Dresden, as well as in several other cities in Germany, as part of the Heinrich Schütz Musikfest and the 350th anniversary of Heinrich Schütz's death. Russ is also planning a new piece based on the works of American composer Philip Glass for presentation using L-ISA Studio in 2023.

About L-ISA Immersive Hyperreal Sound technology
​First introduced in 2016, L-ISA technology helped shape the future of sound by introducing a new way to design, process, mix, and experience multi-channel sound for live performances. L-ISA Immersive Hyperreal Sound technology combines L-Acoustics loudspeaker systems in a multi-array configuration with spatial processing hardware and software-based audio tools to manage every step of an immersive audio project from the design through to the show itself. High-profile artists have already deployed L-ISA technology across various musical styles, including Ennio Morricone and his orchestra, Mark Knopfler, ODESZA, Lorde, Aerosmith, and alt-J, among others. It has also been deployed in installations such as the Serpentine Pavilion, ARTECHOUSE NYC, SPYSCAPE museum, Puy du Fou history theme park in France, and Coachella 360° Antarctic Dome experience, and in performing arts spaces such as EartH in London, Moscow Musical Theater, and Resorts World Las Vegas. ​

About L-Acoustics
​Founded in 1984 near Paris, France, L-Acoustics is the market leader in professional sound reinforcement technologies. With over 500 team members worldwide and offices in Paris, London, Singapore, Los Angeles, and New York, L-Acoustics is present in over 80 countries via our network of Certified Providers. Focused on solutions that elevate the audience experience, more than 20% of L-Acoustics’ talent is devoted to R&D in the areas of acoustics, applications, mechanics, electronics, signal processing, and software development. In recognition of creating innovative professional sound technology, L-Acoustics was named as one of Fast Company’s Most Innovative Companies of 2020.

Recognized for pioneering the line source array, L-Acoustics continues to shape the future of the professional audio industry with L-ISA Immersive Hyperreal Sound technology, a multidimensional, object-based approach to designing, mixing, and processing sound that results in extremely natural and intelligible audio, and a more vibrant, authentic connection between artists and their fans. Now also available for exceptional residential and architectural immersive sound spaces with L-Acoustics Creations designs.

L-Acoustics technologies can be heard in places like the Hollywood Bowl, Dickies Arena, Allianz Arena, home of Bayern Munich, or the Philharmonie de Paris, as well as the world’s top-grossing festivals, and on tour with world-class artists such as Mark Knopfler, Aerosmith, and P!NK.