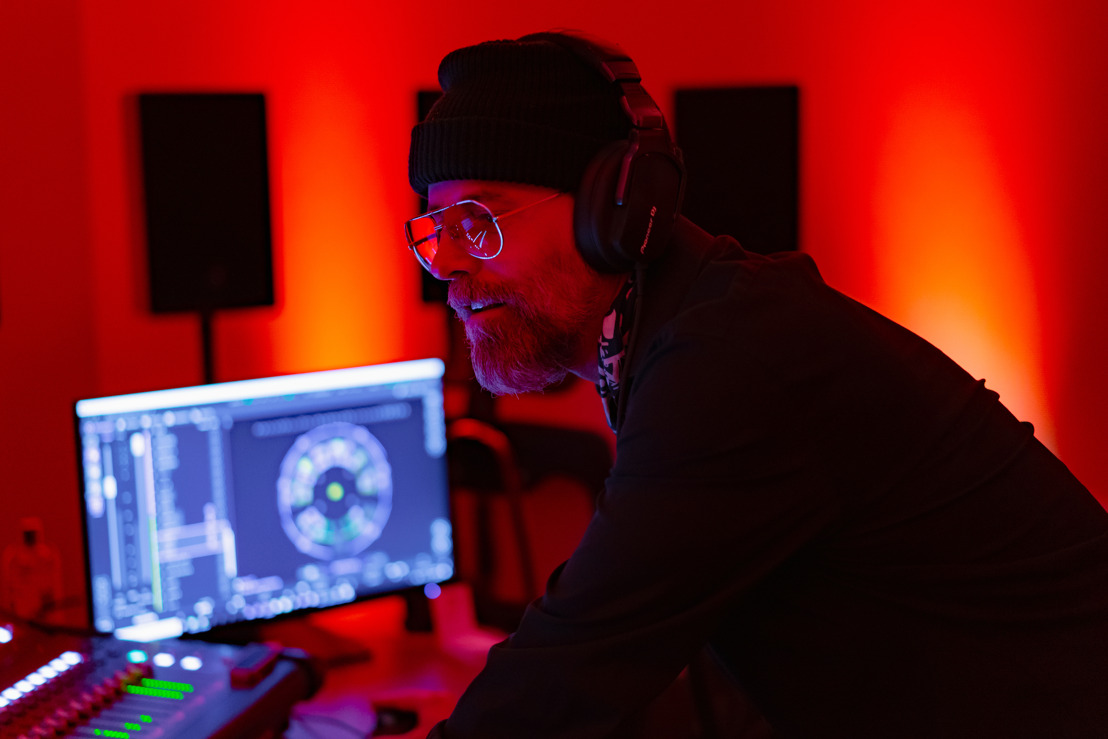 The song’s melody and lyrics were written seven years ago by Charlz after she experienced a loss in her life. “It shocked me in the heart, the first time I heard it,” says Latroit, who spent the next several years tinkering with the track, never fully satisfied that it relayed the song’s heartfelt underpinnings. After going through a life-changing event of his own in early 2021, he was more determined than ever to come up with a definitive version that would do the song justice. “Knowing how much that song meant lyrically,” he says, “I had to step up to the occasion musically and emotionally.”

​An expansive sonic canvas
​As a newcomer to spatial audio in general and L-ISA Studio in particular, Latroit collaborated with L-Acoustics L-ISA engineer Carlos Mosquera on the immersive mix of “Dance My Tears Away.”

An immersive, spatial audio mix provided the ideal canvas for a song that had seen several remix iterations over the years and a project file rich in 72 tracks, offering limitless creative options. “When you have so many versions of a song, there are so many tracks that you can make full use of all the space and multiple speakers,” Latroit says.

The software, which can be operated from a touch screen, was very intuitive. “I instantly got it. The ability to work on a tactile interface made it really easy,” says Latroit. “L-ISA also has a visual component; you can see where things are in the room on the screen and manipulate them, and immediately hear them in real time. I’m quite a visual guy, so that was helpful,” he adds. L-ISA Studio software has been nominated for a 2022 NAMM TEC Award in the Outstanding Technical Achievement category.

Along with L-ISA, L-Acoustics’ BluSpace standard offers a match to human hearing response, arraying 13 speakers horizontally at 15-degree intervals in front of the listener with another five behind, 30 degrees apart, plus subwoofers and overheads.

A different kind of kitchen
​While there was plenty of experimentation in the mix process, Mosquera helped him keep things focused. “You get the possibilities immediately. But what takes a second — and Carlos was very patient with me — is the discipline. You’re in a kitchen with all the flavors that you like, but they don’t really go together all at once. Carlos and I discussed what would be interesting versus distracting.”

Latroit, an analog synth enthusiast, offers the example of one of his favorite mono analog synths, Pioneer DJ’s Toraiz AS-1, designed with Dave Smith Instruments, for its creative possibilities in the song. “You can only play one note at a time, so each note got its own track and its own space and place in the arrangement. One four-note chord has four tracks, so each note could be represented in a different place in the room. I get chills thinking about it,” he says.

After experimenting with different locations and environments for the lead vocal, he continues, “I ended up in a cathedral with Charlz as the voice of God. Her voice is clean in front of you and there is this cathedral wash behind you.”

Latroit credits his friend, Oscar-winning sound designer Mark Mangini, for influencing his approach to production. “I learned a lot from him. This is where I developed the narrative about the impact of technology with songwriting. Mark taught me a lot about how he tells stories with sound.”

“Jason was the driving force behind this,” Latroit says. “It was his concept to do something with L-Acoustics that was interesting and fun.” A binaural version of the immersive mix of “Dance My Tears Away” is available on YouTube. The stereo mix of the song can also be found on all major streaming platforms, with release of an L-ISA Studio version mixed for Dolby Atmos in the pipeline.

L-Acoustics and Latroit look forward to people hearing his immersive mix of “Dance My Tears Away” and enjoying a short video mixed binaurally which documents the creative process. The song will be introduced at the upcoming DJ Expo in Atlantic City where attendees will have the opportunity to interact directly with the track in L-ISA Studio.

At the end of the mixing session, Latroit was able to experience the track in Island by L-Acoustics Creations, a luxurious 360° immersive sound lounge embedded with concert-grade loudspeakers. “Sound on this level is like an acoustic weighted blanket, ensconcing you and surrounding you and taking you into a different world. You hear with every part of your body. You hear and you feel. I’m excited about people experiencing this,” he says. “Thanks to L-Acoustics for making it possible; I’m honored and excited to be part of the first wave of artists to use the technology.”

About Latroit
​Early in his career, Dennis White (Latroit) was approached by Detroit techno originator Kevin Saunderson to join Inner City as music director. He went on to garner ARIA- and BPI-certified Gold-, Platinum- and Double Platinum-selling records, 100 million-plus digital streams, more than 20 top 10 Billboard Club Chart tracks and remixes, and dozens of high-profile TV, film and commercial placements. He won a Grammy in 2018 in the Best Remixed Recording (Non-Classical) category for his remix of "You Move" by Depeche Mode. Learn more at latroit.com

About L-ISA Immersive Hyperreal Sound technology
​First introduced in 2016, L-ISA technology helped shape the future of sound by introducing a new way to design, process, mix, and experience multi-channel sound for live performances. L-ISA Immersive Hyperreal Sound technology combines L-Acoustics loudspeaker systems in a multi-array configuration with spatial processing hardware and software-based audio tools to manage every step of an immersive audio project from the design through to the show itself. High-profile artists have already deployed L-ISA technology across various musical styles, including Ennio Morricone and his orchestra, Mark Knopfler, ODESZA, Lorde, Aerosmith, and alt-J, among others. It has also been deployed in installations such as the Serpentine Pavilion, ARTECHOUSE NYC, SPYSCAPE museum, Puy du Fou history theme park in France, and Coachella 360° Antarctic Dome experience, and in performing arts spaces such as EartH in London, Moscow Musical Theater, and Resorts World Las Vegas. ​

About L-Acoustics
​Founded in 1984 near Paris, France, L-Acoustics is the market leader in professional sound reinforcement technologies. With over 500 team members worldwide and offices in Paris, London, Singapore, Los Angeles, and New York, L-Acoustics is present in over 80 countries via our network of Certified Providers. Focused on solutions that elevate the audience experience, more than 20% of L-Acoustics’ talent is devoted to R&D in the areas of acoustics, applications, mechanics, electronics, signal processing, and software development. In recognition of creating innovative professional sound technology, L-Acoustics was named as one of Fast Company’s Most Innovative Companies of 2020.

Recognized for pioneering the line source array, L-Acoustics continues to shape the future of the professional audio industry with L-ISA Immersive Hyperreal Sound technology, a multidimensional, object-based approach to designing, mixing, and processing sound that results in extremely natural and intelligible audio, and a more vibrant, authentic connection between artists and their fans. Now also available for exceptional residential and architectural immersive sound spaces with L-Acoustics Creations designs.

L-Acoustics technologies can be heard in places like the Hollywood Bowl, Dickies Arena, Allianz Arena, home of Bayern Munich, or the Philharmonie de Paris, as well as the world’s top-grossing festivals, and on tour with world-class artists such as Mark Knopfler, Aerosmith, and P!NK.